Get this document and a version with empty code chunks at the template repository on github: https://github.com/VT-Hydroinformatics/4-Intro-Stats

5.1 Reading for this section: Statistical Methods in Water Resources: Chapter 1

First let’s generate some synthetic data and talk about how to visualize it. 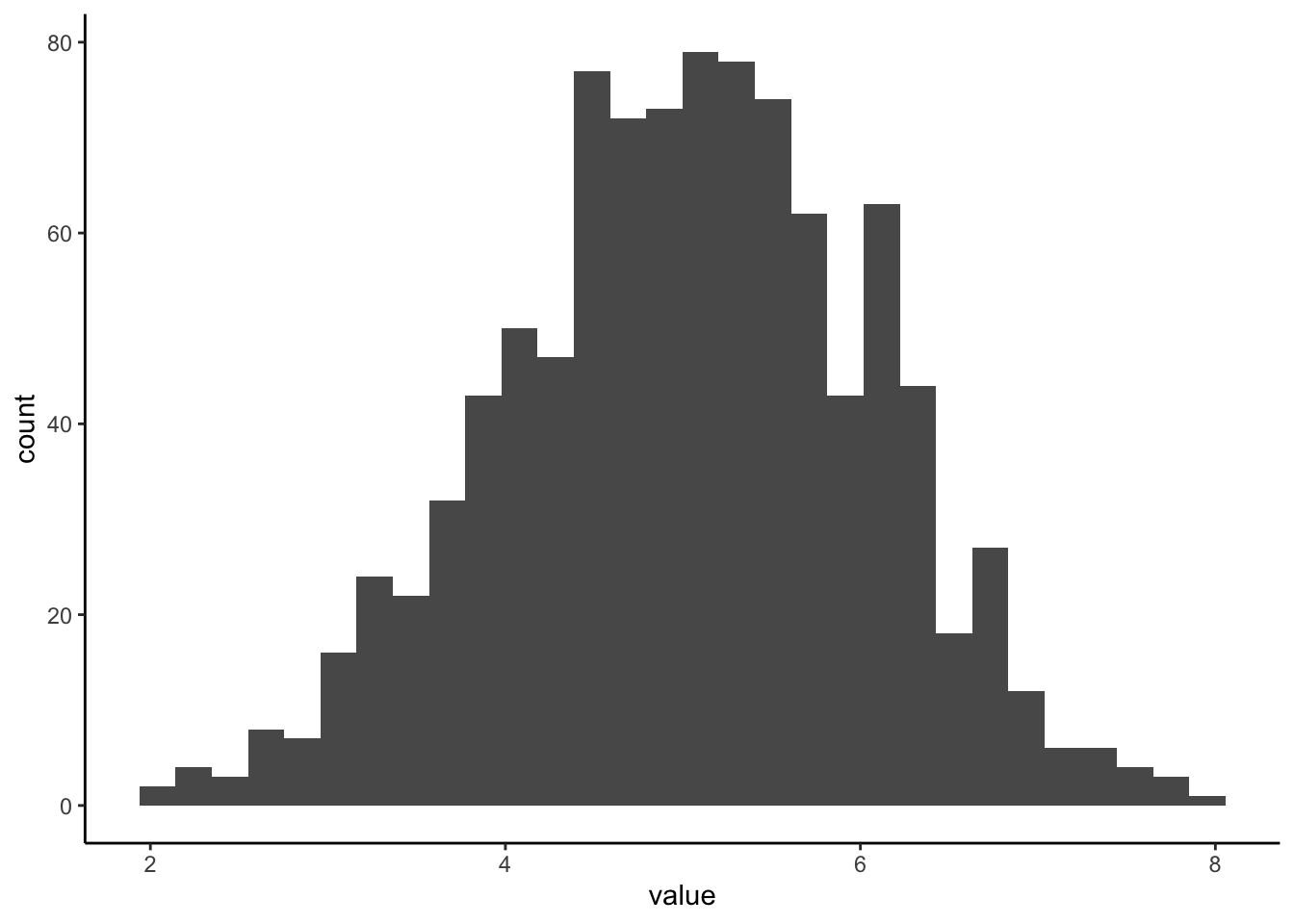 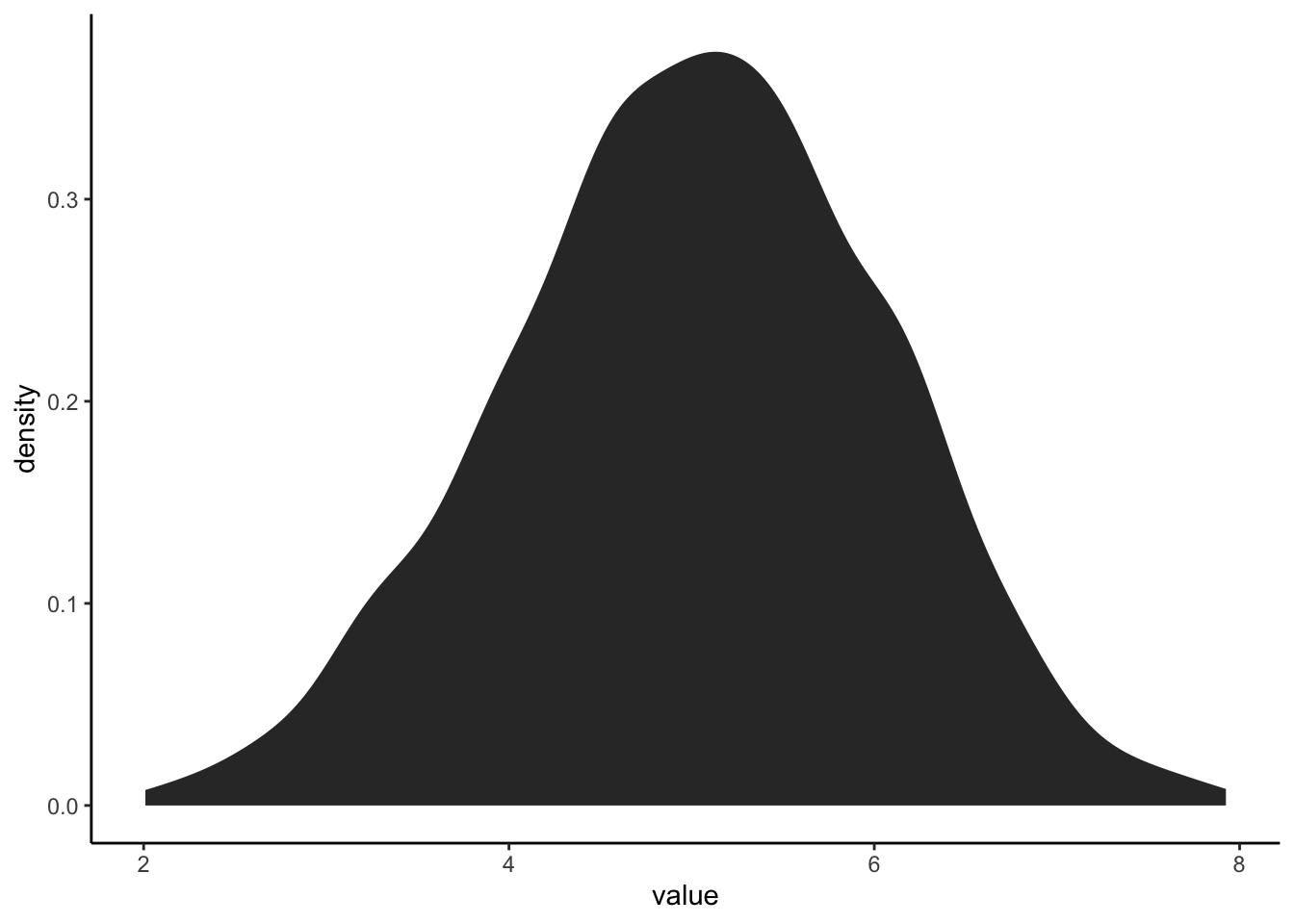 We will save each plot as ggplot object and then output them using the patchwork package (loaded in the setup chunk).

What is the difference between a histogram and a pdf?
What features of the histogram are preserved? Which are lost? 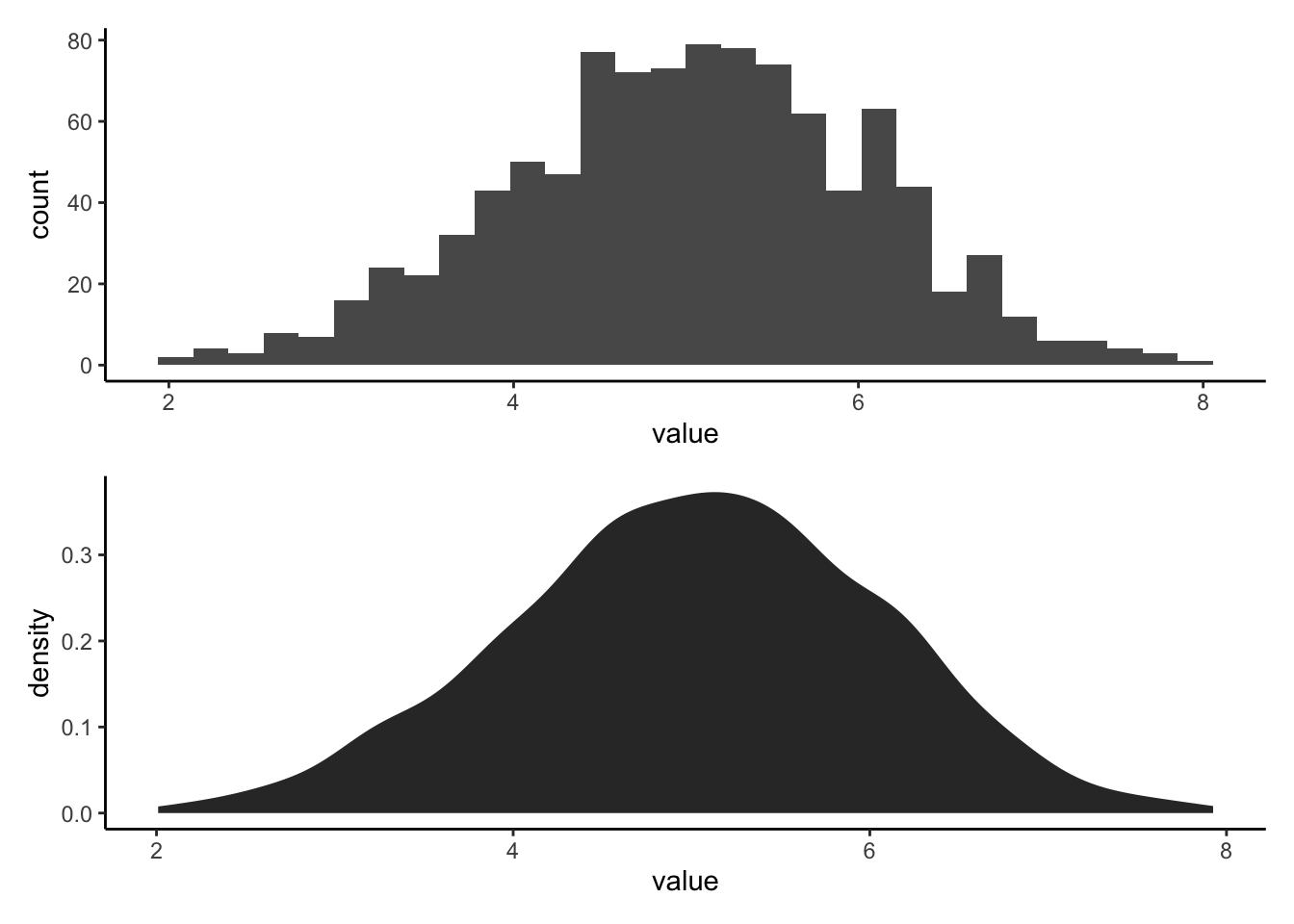 5.3 What is the difference between a sample and a population.

Let’s write some code for an example:

We will create a POPULATION that is a large set of numbers. Think of this is as the concentration of Calcium in every bit of water in a lake. Then we will create a SAMPLE by randomly grabbing values from the POPULATION. This simulates us going around in a boat and taking grab samples in an effort to figure out the concentration of calcium in the lake.

We can then run this code a bunch of times, you’ll get a different sample each time. You can also take a smaller or larger number of samples by changing “size” in the sample() function. 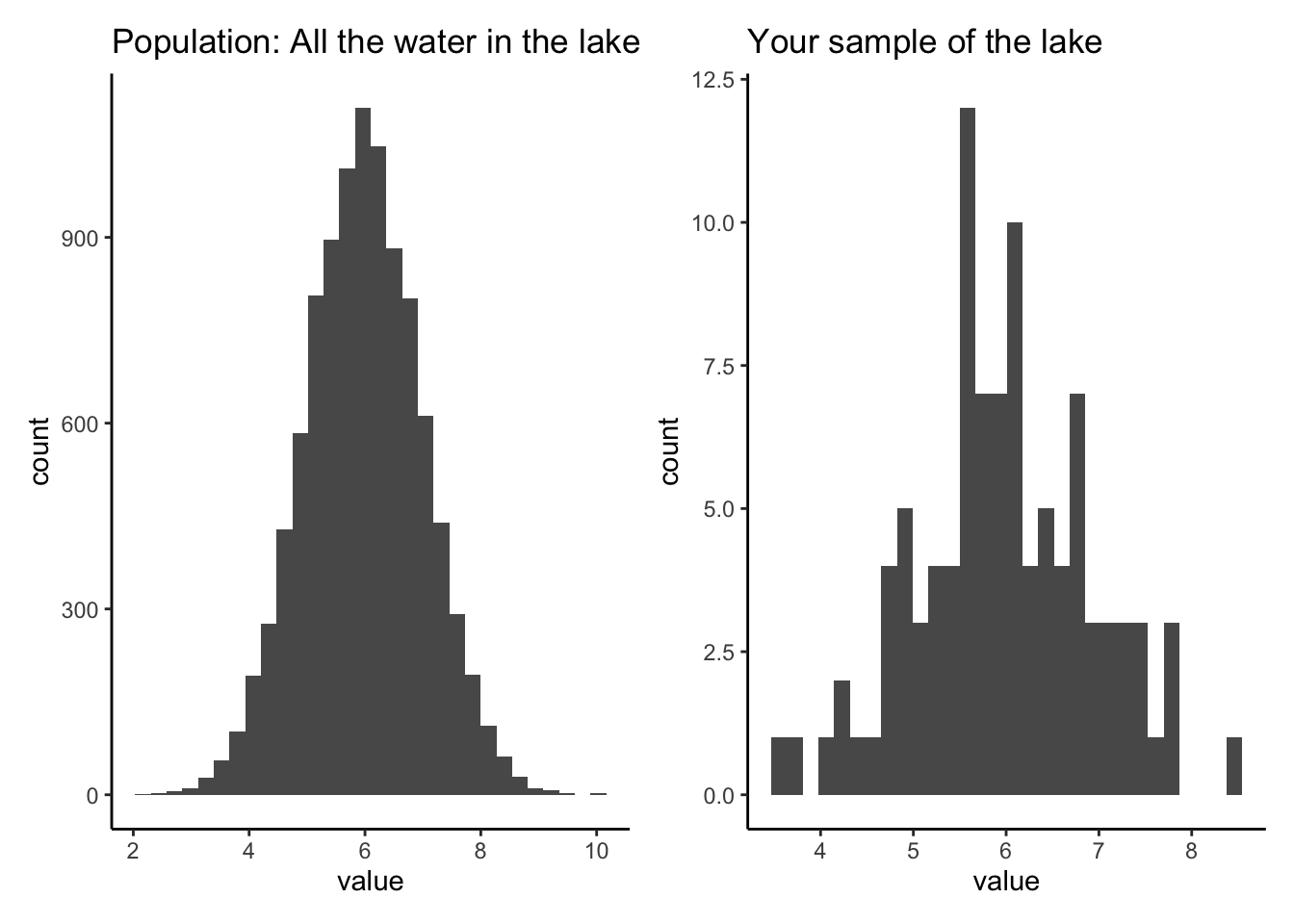 When we take a sample of a population, there are a few things we will want to measure about the distribution of values: where is the middle, how variable is it, and is it skewed to one side or another?

The first of these, “where is the middle?” is addressed with measures of central tendency. We will discuss three possible ways to measure this. The mean, median, and weighted mean.

To find the mean (average), you just sum up all the values in your sample and divide by the number of values.

To find the median, you put the values IN ORDER, and choose the middle value. The middle value is the one where there are the same number of values higher than that value as there are values lower than it.

Because it uses the order of the values rather than just the values themselves, the median is resistant to skewed distributions. This means it is less effected by very large or very small values compared to most values in the sample data.

Note that distributions like pineQ, that are positively skewed, are very common in environmental data. 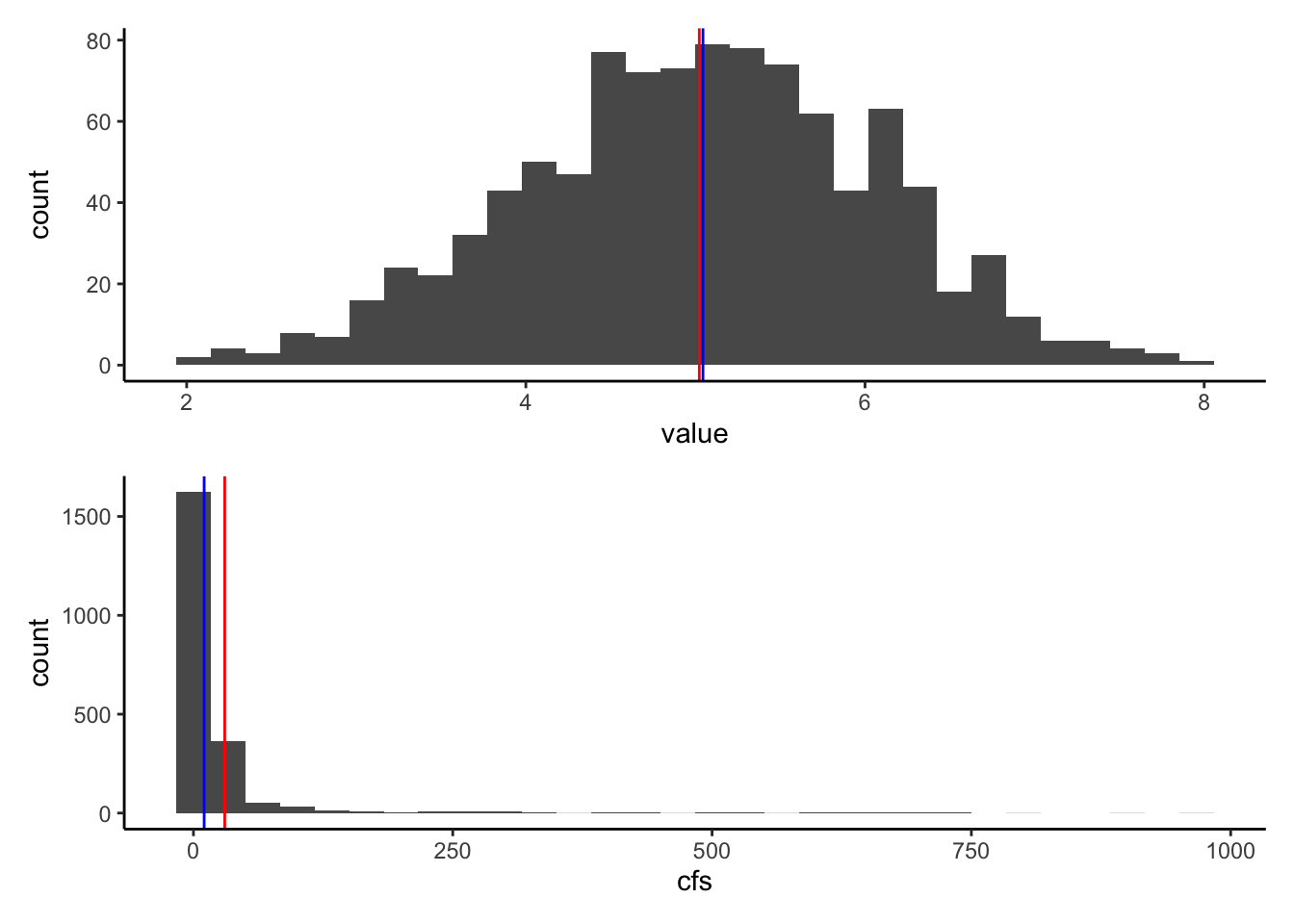 There are certain situations in which this is not the ideal way to calculate an average. A common one in hydrology is that you have samples that are supposed to represent different portions of an area. One sample may be taken to measure a forest type that takes up 100 ha of a watershed while another sample represents a forest type that only takes up 4 ha. You may not want to simply average those values!

Another example is precipitation gages. In the image below, you see there are 5 rain gages. To get a precipitation number for the watershed, we could just average them, or we could assume they represent an area of the watershed and then weight their values by the area they represent. One method of designating the areas is by using Theissen polygons (the middle watershed). Another method of weighting is isohyetal contours, but we won’t worry about that for now!

In the weighted situation, we find the average by multiplying each precipitation values by the proportion of the watershed it represents, shown by the Thiessen polygons, and then add them all together. Let’s do an example. 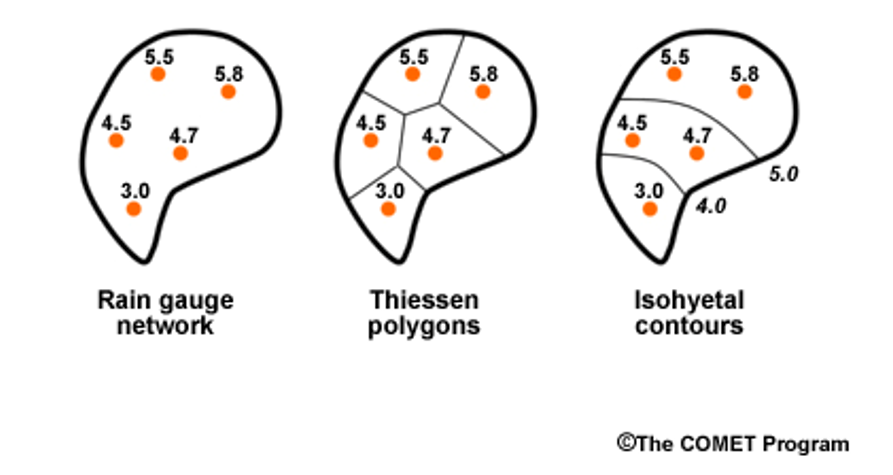 Write some code to compute the regular mean precip from the values, and then the weighted mean.

We will explore four measures of variability:

Sum of the squared difference of each value from the mean divided by the number of samples minus 1. var()

The square root of the variance sd()

**Both variance and standard deviation are sensitive to outliers.

CV is simply the standard deviation divided by the mean of the data. Because you divide by the mean, CV is dimensionless. This allows you to use it to compare the variation in samples with very different magnitudes. 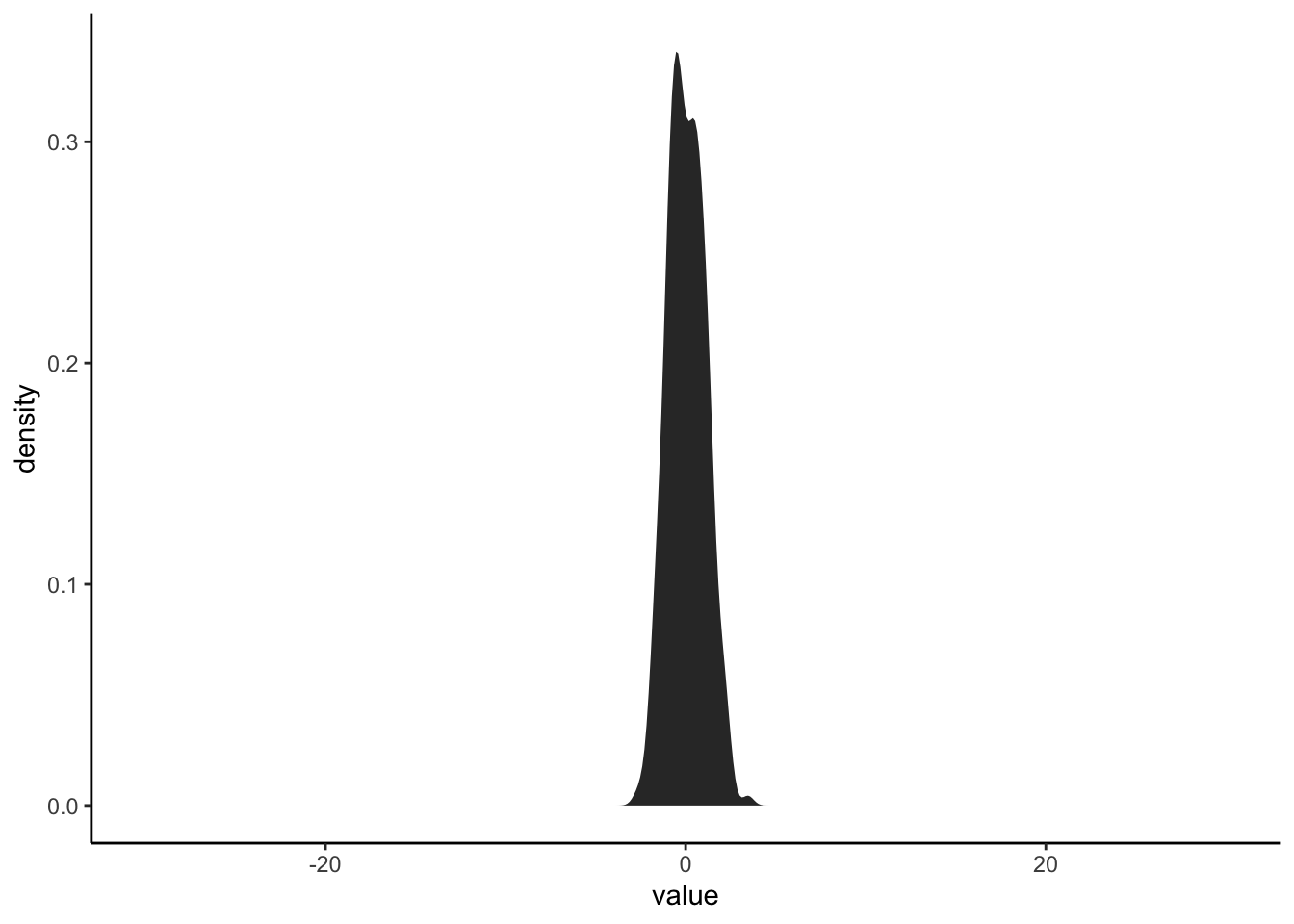 5.5.0.5 What about how lopsided the distribution is?

There are several ways to measure this as well, but we are just going to look at one: The Quartile skew. The quartile skew is the difference between the upper quartiles (50th-75th) and the lower quartiles (25th-50th) divided by the IQR (75th-25th).

Let’s look at the quartile skew of the two distributions we’ve been measuring. Calculate it for the pineQ discharge data and the random normal distribution we generated.

Which one is more skewed?

5.6 What is a normal distribution and how can we determine if we have one?

Many statistical tests require that the distribution of the data you put into them is normally distributed. BE CAREFUL! There are also tests that use ranked data. Similar to how the median is resistant to outliers, these rank-based tests are resistant to non-normal data. Two popular ones are Kruskal-Wallis and Wilcoxon rank-sum.

But how far off can you be before you don’t consider a distribution normal? Seems like a judgement call!

R to the rescue! There is a built in test for normality called shapiro.test(), which performs the Shapiro-Wilk test of normality. The hypothesis this test tests is “The distribution is normal.” So if this function returns a p-value less than 0.05, you reject that hypothesis and your function is NOT normal.

You can also make a quantile-quantile plot. A straight line on this plot indicates a normal distribution, a non-straight line indicates it is not normal. 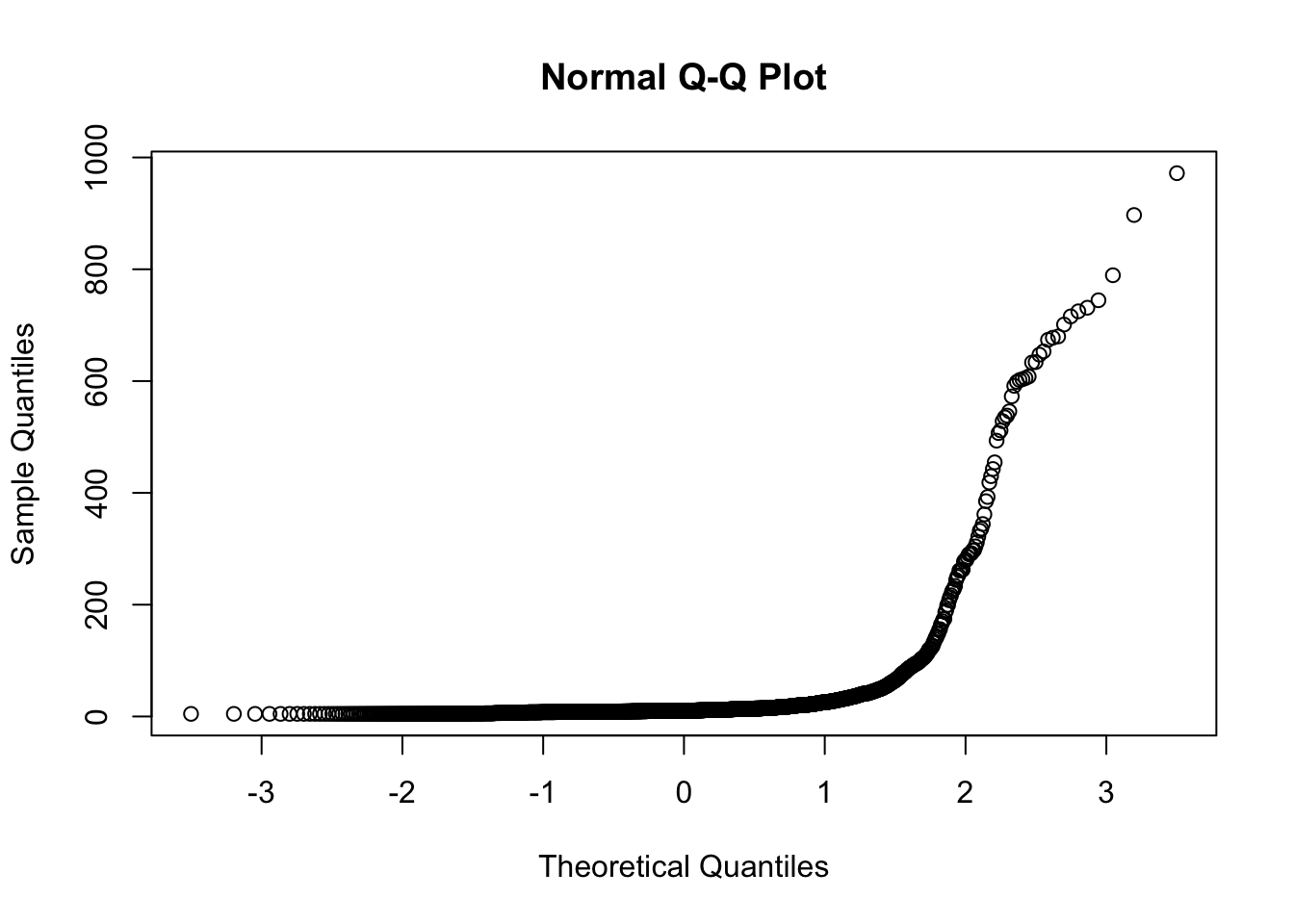